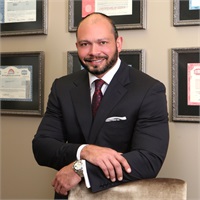 Mark Lawrence has always been passionate about finance and the intricacies of the financial markets. With a desire to pursue a career that allowed him to help others, he entered the financial services industry in 1994 and hasn’t looked back since. Today, with more than two decades of experience, he enjoys the opportunity he has to help people understand the financial markets and make a positive impact on their lives. Specializing in creating wealth preservation and distribution strategies for retirees, he brings a client-focused approach to his services. His goal is to ensure that each recommendation aligns with the client’s specific needs.

Mark started his career working at a regional brokerage, followed by several years with Edward Jones as a Financial Advisor and Limited Partner. While he enjoyed providing financial advice at Edward Jones, he wanted to expand his business by starting a firm that would be able to offer truly independent, objective advice without any proprietary products. With this goal in mind, he joined LPL Financial and founded his own firm, Sterling Portfolio Managers LLC.

Over the course of his career, Mark has been recognized for his excellent client service and performance. He has been a member of LPL Financial’s Patriot’s Club, a distinction awarded to fewer than 10% of LPL Financial advisors, and is based on production. In 2015 - 2017, he was named by Texas Monthly Magazine as one of Houston’s Five Star Wealth Managers*.

As a young child, Mark lived in multiple countries, including Canada, Barbados, Panama, and Mexico, before his family settled in San Antonio, Texas. He enjoys spending time with his family and menagerie of animals, including horses, dogs, and cats. An adrenaline enthusiast and fitness nut, he has spent many years competing in bodybuilding and multiple combat sports. Besides family and fitness, he is passionate about traveling and experiencing new cultures. He has enjoyed spending time in Europe and has been to almost every island in the Caribbean. One of his most memorable adventures took him to Spain where he ran with the bulls in Pamplona for the second time.

*Award based on 10 objective criteria associated with providing quality services to client such as credentials, experience, and assets under management, among other factors. Wealth Managers do not pay a fee to be considered or placed on the final list of 2015-2017 Five Star Wealth Managers.

Get Financial News & Updates Delivered to Your Inbox